I don’t have much to say on this one, except it’s election season (which in Argentina means half the country’s GDP will be spent and 80% of its trees killed to plaster the city with tirelessly repetitive images), and the images are abound. 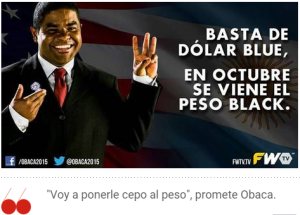 Side LOL factor – he goes by ”Obaca.” I die. Mr. President, perhaps your approval ratings are higher in this hemisphere.

Posts (in no particular order)